Shitty inventions that everybody loves.
Everyone's an idiot except for me. This is a truth about life that I realized a long time ago, and have dealt with the burden of being a genius amongst dim-witted plebeians for a long time. I feel like the protagonist in an old-school RPG who's walking around a village where everyone is bumbling about selling herbs and knick-knacks, while I'm doing all the awesome shit like slaying dragons and writing articles for my website. When I was 16-years-old, I tried to patent some technology that was essentially the same technology used in the Nintendo Wii (true story). Due to lack of funds to file the patent, I moved on to a lowly undergraduate education at Shit-Brick University. So it frustrates me when I see so many of these shitty inventions cherished:
I posit that these inventions aren't used because they're useful, but rather, because they were marketed as novel and everyone thought these inventions were awesome. The flexible straw, for example, was invented by a guy who saw his daughter struggling to drink a milkshake at the counter of a restaurant.1 Instead of, say, asking his 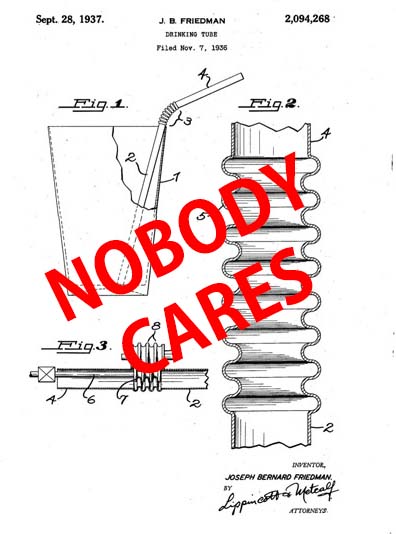 The innovation nobody needs or wants. daughter to pick up the drink, he went home and made a shitty invention instead. These straws were invented for a child who was too lazy to pick up her drink, by an adult who didn't have the foresight to ask for a smaller cup for the child. And now I'm relegated to using these drippy pieces of shit forever. Since the flexible straw was invented with a milkshake in mind, the inventor might not have noticed that these flimsy straws drip all over everything after you drink from them. Garbage. Milk shakes are thick, and don't drip as easily, so if you idiots want to drink a milk shake through a flexible straw, be my guest. But why would anyone want to do that? Flexible straws are too narrow to drink anything thick or viscous, which makes them useless even for the task they were invented for. I wouldn't harp on flexible straws as much if it weren't so difficult to get non-flexible straws these days. I've had to order pre-wrapped straight straws from restaurant suppliers because of the scarcity of non-bendy bullshit. It's an exercise in frustration trying to predict where the mouth of the straw is every time you're done sipping because it swings around wildly like a pendulum. I plan on filing a lawsuit against the makers of flexible straws for all the theft of my time and energy I've wasted trying to put the straw into my mouth and cleaning up the mess they make. I hinted at it near the end of this episode, but another useless device that's taken over a segment of the market because of novelty rather than functionality is touch-screen phones. When the original iPhone came out, you couldn't install any apps, copy & paste, send picture messages, set custom ring tones, etc.2 Imagine a phone being marketed today that couldn't do all of those things, yet people ate it up in spite of the fact that every other phone on the market was functionally superior, because of the power of Apple's marketing. Now every phone today is a smudgy piece of shit with low battery life, fragile screens and a bezel that forces you to contort your hands like tweezers to hold the sides so you have no grip and drop your phone. Even the phone I use today is a shitty touch-screen (people keep asking me if I still use a QWERTY phone, and unfortunately I don't because Apple and its copycats have ruined the entire cellphone market with this crap). For anyone curious about the selfie-stick article where the guy was struck by lightning, let the Schadenfreude flow through you in the sources below.3 The selfie-stick has been called the "narcissistick" and "Wand of Narcissus," and I'll add a few I've coined myself: The Hedonistick and The Prick Stick. Nobody gives a shit about your selfies. You don't need to carry around accessories to make yourself look incrementally better. You're not a photographer and nobody cares if your photo is in frame on your shitty Instagram account. Stop bringing that baggage with you everywhere. It's obstructing everyone's view and is almost as bad as the people who take photos with tablets: Padhole. Sources:
Tweet 238,903 people got exophiala dermatitidis from their overpriced dishwashers that act as giant bacterial petri dishes.4
Available now!
Join the mailing list here
Back to how much I rule... • New Book • Store • Email • Patreon •