You're not a nerd, geeks aren't sexy
and you don't "fucking love" science.
I posted this status update on Facebook the other day:

This was in regards to the growing popularity of a Facebook page called "I fucking love science."

I offer this article as an apology for what I said.
Any time I see people on Facebook simultaneously liking "iCarly, One Direction" and "The Pauly D Project" while also liking fucking loving science, it raises some red flags. The problem is, people who claim to "fucking love" science don't. They don't even like science, let alone "fucking love it." Want proof? Here are two posts from IFLS. On the left is a typical post, and on the right, a rare scientific post. Note the number of "likes" each post received: 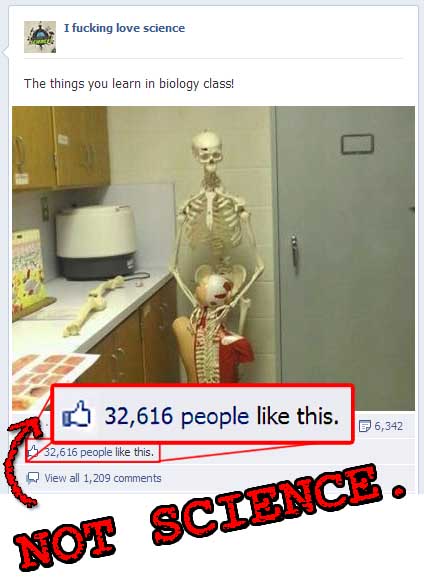 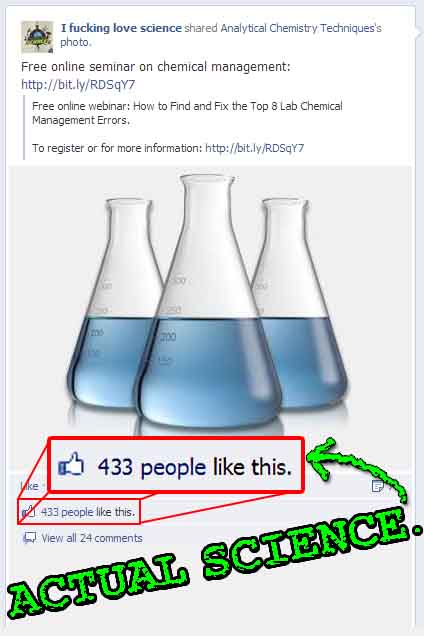 Posted: Oct. 10 (LEFT), Oct. 4 (RIGHT)
No, you "fucking don't."
What you actually "love" is photography, not science. Below are a handful of posts from "I fucking love science:" The page is comprised mostly of pictures of space, Neil deGrasse Tyson, pop-science junk, worn out memes, Neil deGrasse Tyson and thinly veiled political agendas. Oh, and Neil deGrasse Tyson: 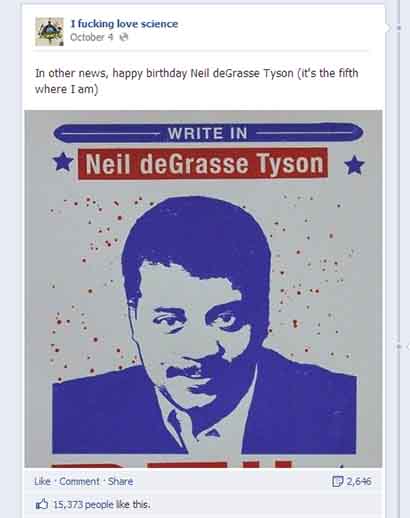 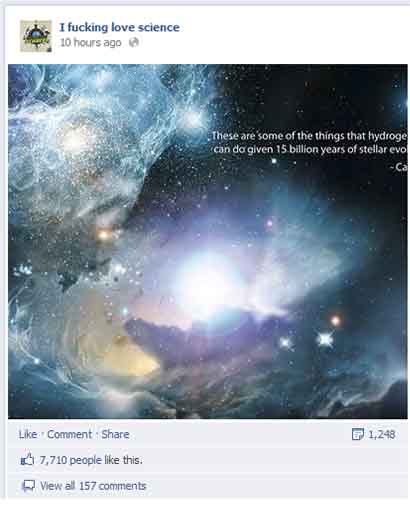 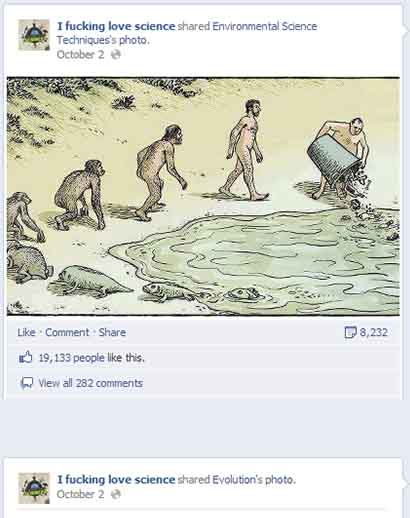 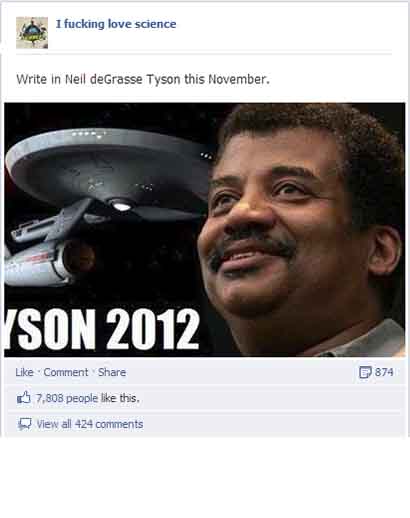 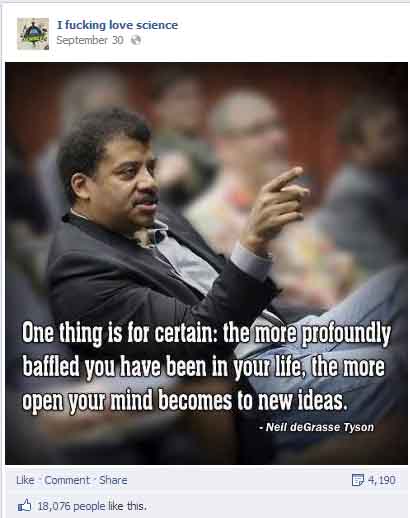 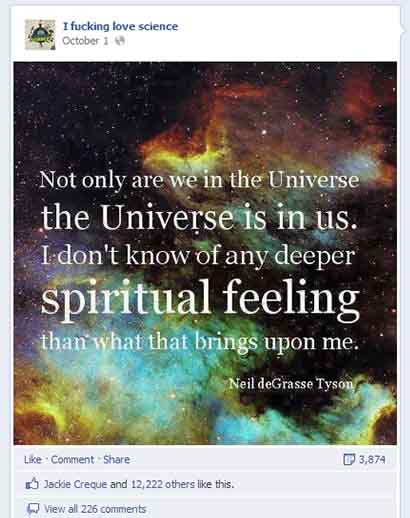 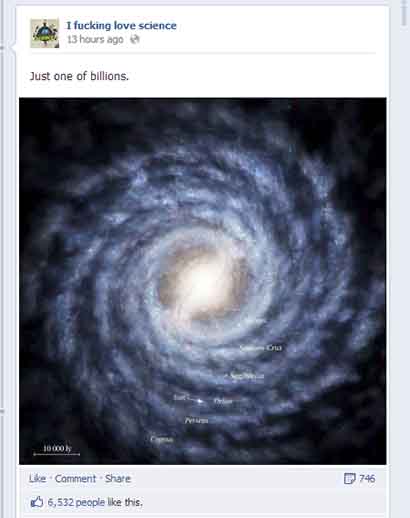 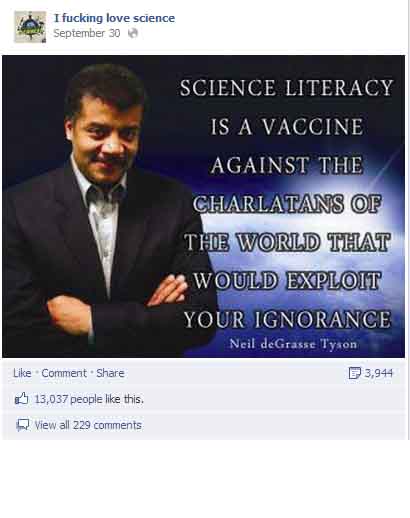 The Internet needs to collectively stop sucking Neil deGrasse Tyson's dick. And add bacon and zombies to that list. I love bacon, but fuck you for ruining it, everyone. Holy shit, just shut the fuck up about bacon. Yeah, it's great, we know. Bacon cups, bacon salt, bacon shirts, bacon gum, bacon, bacon, bacon, WE GET IT. Bacon is your Jesus, we know, now do a shot of bleach and take some buckshot to the face. So take this picture for example:

There's nothing "scientific" about it. It's just an image. There isn't anything that makes this more qualitatively scientific than say, a picture of some rocks, or some cereal. Galaxies are comprised of objects, and this is just a visual depiction of one. And it's not even a photograph. These are just images of things. What exactly makes this scientific?
SO WHAT?
At this point you might be saying, "so what? It's just a Facebook page that promotes humor and photography under the guise of science. What's the big deal?" Well in their fervor to promote shitty memes and pop-sci, they actually misinform people. Take this infographic for example: 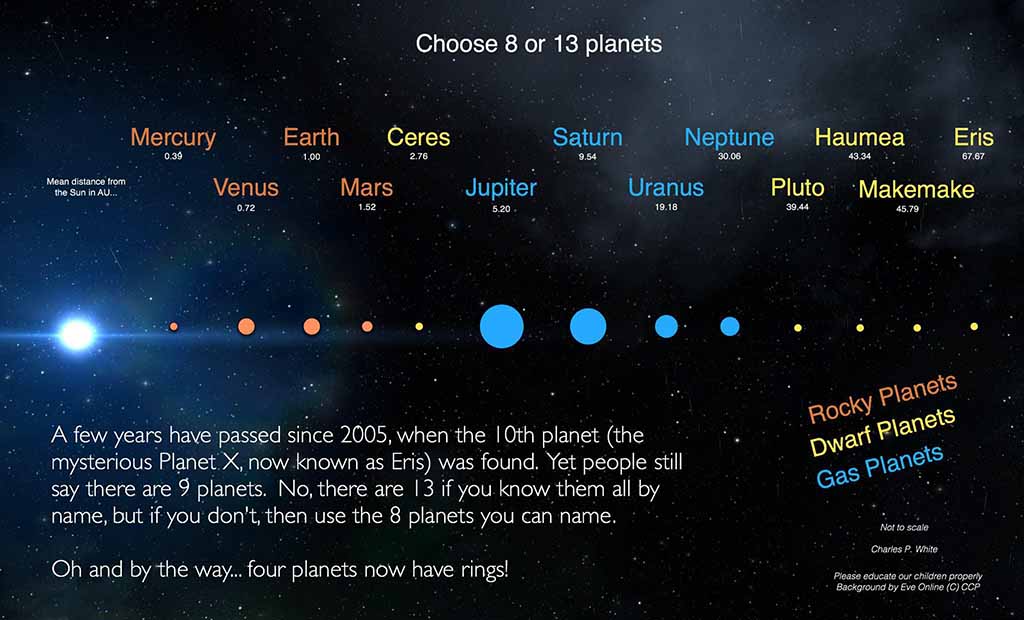 This image went viral and received over 10,064 "likes" in 24 hours.
The reason people say there are 8 planets is because there are 8 planets. A casual reader coming away from this post might conclude that this is one of those "ah-hah!" moments that the Internet is famous for, where "EVERYTHING-YOU-THOUGHT-YOU-KNEW-WAS-WRONG," except it isn't. Pluto, Haumea, Makemake, Eris and Ceres aren't "planets." You don't get to "choose 8 or 13 planets." And there aren't "13 if you know them all by name." Your ability to name planets has no bearing on whether or not they exist. There will be the same number of planets whether you acknowledge it or not. There's a great article at Universe Today explaining why Pluto is not a planet and why it doesn't meet the requirements in order to be classified as one ("dwarf planets" aren't the same). Not only is this infographic wrong, it's lazy. It references 8, 13, 9 planets and even references the discovery of a "10th planet." What pisses me off even more is that IFLS' own messiah, Neil deGrasse Tyson, removed Pluto's distinction as a planet as director of the Hayden Planetarium, despite this infographic's convoluted insistence to the contrary. People love science in the same way they love classical music or art. Science and "geeky" subjects are perceived as being hip, cool and intellectual. So people take a passing interest just long enough to glom onto these labels and call themselves "geeks" or "nerds" every chance they get. I feel a sharp pang in my head every time some moron on Twitter or Facebook says something like "i'm doing my homework i'm such a nerd LOL!!!" Wrong, fuck belch. You're not a nerd for doing your assigned homework; you're doing it because you have to, not because you want to. That'd be like saying, "I'm eating food, I'm such a foodie, LOL!!!" Since when did it become cool to label yourself a "nerd" anyway? It's an artificial counter-culture construct exploited by stupid websites like these:

Well someone forgot to give the "nerds-are-sexy" memo to my friends, because most of them are nerds and none of them are getting laid. The model above looks like she has the choice to have lots of sex. She's probably not a nerd. Not fair? Well neither is being born attractive. Let the nerds have something. Not everyone was born with good looks or enough power & wealth to compensate. If you have to tell people you're a nerd, chances are you're not. Nerds don't have to advertise their status. We know. Being a nerd is a byproduct of losing yourself in what you do, often at the expense of friends, family and hygiene. Until or unless you've paid your dues, you haven't earned the right—or reason—to call yourself a nerd. Being a nerd isn't graceful or glorious. It's a life born out of obsessive dedication to a craft, discipline or collecting some stupid shit that only you care about. If you think geeks are so sexy or cool, bang one. Go to any university and find a computer or physics lab at 2AM and take your pick. Until then, go commit cultural fraud someplace else, and take your phony "I fucking love science" group with you. 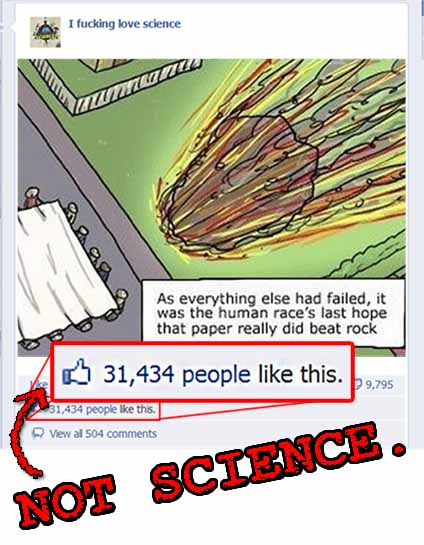 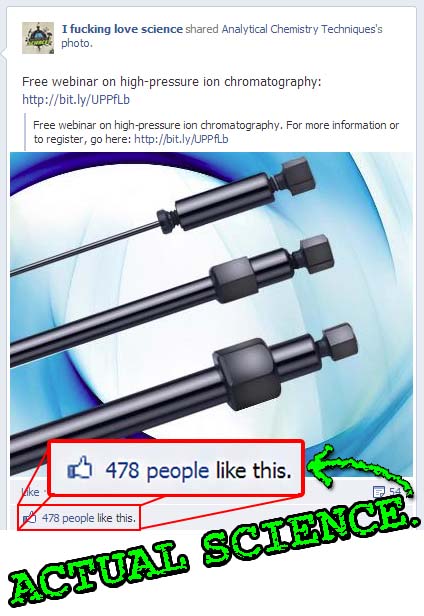 1,613,048 people only understand one definition of the word "apology."