The Vegetarian Asshole Test:
Here's a simple test to find out whether or not you're an asshole: 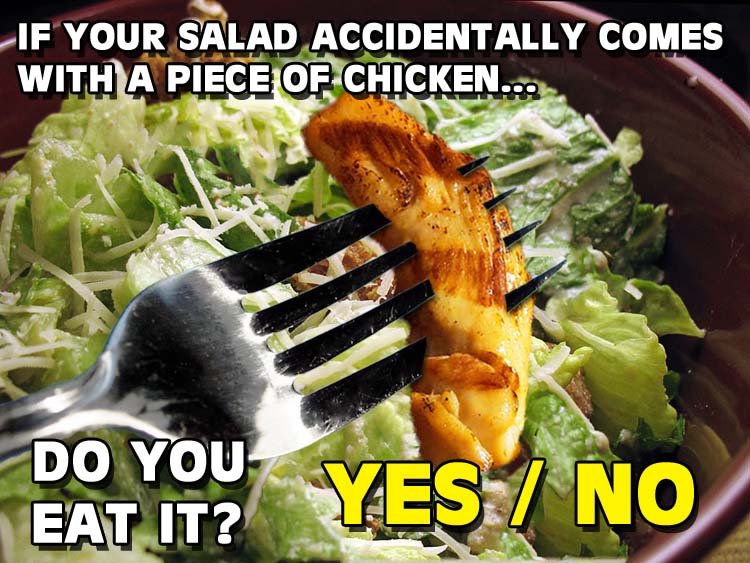 If you answered "NO," you are an asshole. Not eating a piece of meat on your plate that you didn't order makes you a full-time asshole because you're effectively saying "yeah, I know it's too late to do anything about it, but I'm still going to let this animal's life die in vain." Not eating a steak that someone brought to you by accident won't bring the animal back to life, won't reduce the demand for meat and it won't make any difference to the meat industry's bottom line. I was in a restaurant the other day when some career bitch sent her dish back because her seafood pasta had seafood in it. First of all, if you order a meat dish and then ask them to hold the meat, you're a jackass. Food is seasoned based on all of the ingredients, including the flavors the meat adds to the dish. So seafood pasta without the seafood tastes like bullshit. You're just eating a steamy coil of soggy pasta. BARF! Of course, when the dish came out with seafood, she made a big song and dance about how she's a vegetarian, making sure everyone within an earshot knew she was better than them. Then she made them take it back and make her another dish. Good call, turbo-bitch! Way to stand up for what you believe in. The world is better off because you sent back that dish. Fewer animals are now dead because you refused to eat those shrimp, right? In fact, it doesn't violate any moral code to eat meat that other people ordered either, and it makes you look like a prick if you let other people's meat go to waste. If your friends order nachos and there's meat on it, not eating it makes you a pious dipshit. Do you think it makes any difference whether or not you put a piece of meat in your mouth that someone else ordered and killed anyway? As long as you didn't order it and had no intention to, eating meat isn't contradictory to your moral stance. 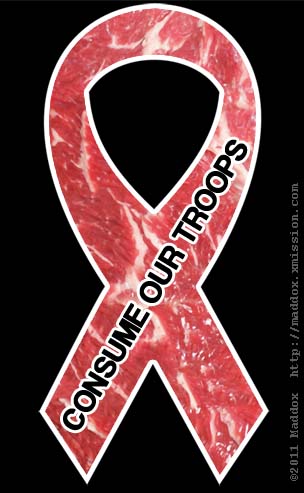 Vegetarians are, in general, negative people. They always assume the worst in humanity and animals alike. Who's to say that animals wouldn't gladly sacrifice themselves for our meals if they knew how happy it made us? After all, most vegetarians argue against speciesism, or the belief that we are different than animals. If that's the case, then shouldn't it stand that a certain percentage of animals would gladly sacrifice themselves for the greater good, like humans who volunteer for military service do? I know it's a little bit different because we don't eat our service men and women, but I've met a lot of troops and I know that most of them would not object to being eaten. I eat animals because I love animals. I love everything about them. The way they taste, the way they smell when they're grilled. Even the way they look at me on my plate, all sizzly and saucy-eyed. Every time I see bacon, I feel like the pig fairy has visited me with a gift. A gift that is sliced from her back, smoked and cured with honey. It's like Mardi Gras in my mouth, with less puke.

But there's a good reason to eat animals if you love them: to bring them off the endangered species list. Thanks to our modern agrarian society, the once-endangered buffalo has made a comeback from a population dwindling in the thousands to no longer being on the list. If it weren't for people eating them, their population would have never made a comeback. That may seem counter-intuitive, but when there's a demand for a type of meat like buffalo, that demand is filled by enterprising young farmers who breed buffalo just for that reason. Since buffalo is some of the leanest meat you can buy, it's in high demand, and they're raised in larger quantities to put into my mouth. Now I know that the anti-speciesist crowd argues that it's better for animals to not exist if their existence is filled with suffering. But rarely do these people ever stop to ask the question: why? Why is all suffering bad? I suffer every day. Sometimes out of boredom. After all, every single person who rots in a cubicle for 10 hours a day is suffering. The only difference between that type of suffering and an animal's, is that humans volunteer to suffer through things like work, school and marriage. That's because we know that with the exception of marriage, suffering sometimes has rewards. In fact, even animals choose to suffer sometimes: they give birth. If all you dipshits who have such a problem with suffering really believed what you said, you'd stop having children, find the nearest cop and ask him to shoot you in the face. That's the only sure way to end suffering. But I don't think all suffering is bad, so long as you learn from it. If I were unfortunate enough to be a parent and saw my child about to put his hand on a hot stove, I'd sure as shit let him. Burning yourself on a stove is a great way to learn to not burn yourself on a stove. Any parent who doesn't let his or her child burn him or herself should have their children taken away for abuse. Not letting your kids suffer is one of the most serious forms of neglect today. The type of suffering animals endure is also different from the type humans endure because animals are dumb. They keep no record of their suffering. There's no collective memory of their agony, and why should there be? Does it matter? Does an animal's suffering make any difference in this world? I'm not suggesting we pointlessly make animals suffer, but if they do in our pursuit for some greater good, like chili, will anything change by going out of our way to not make animals suffer? If you buy free-range eggs, do you really ever know for sure that animal who bore your eggs didn't suffer? Or are you just buying into a story to make yourself feel better? And how can you be sure that animal didn't suffer some form of mental anguish that you can't determine by visual inspection? If animals are the same as humans, then shouldn't it stand that just as many animals suffer from some form of autism, retardation or psychological disorder as humans do? 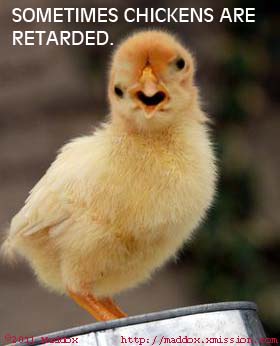 Buying cage-free or free-range eggs means you feel guilty about something, and you're too lazy to actually do something about it, like raising your own chickens to make sure they're properly cared for both physically and psychologically. Free-range eggs simply make you feel less guilty without actually having to exert any effort or be uncomfortable in any way. And that makes you morally dubious at best, and definitely not better than anyone who doesn't buy into your narrative or world view. And while you're at it, if you don't eat someone's leftovers because it has meat in it, that makes you a bad person. When you choose to make a showy stand by not eating meat, even when your consumption makes absolutely no difference in the number animals killed, what you are saying is that your desire to be perceived as morally superior to your peers outweighs your actual goal of being morally superior. Get over yourselves. Stop defining yourselves by your diet. You aren't what you don't eat.

804,961 animals have been thrown away when vegetarians callously send their dishes back to the kitchen.