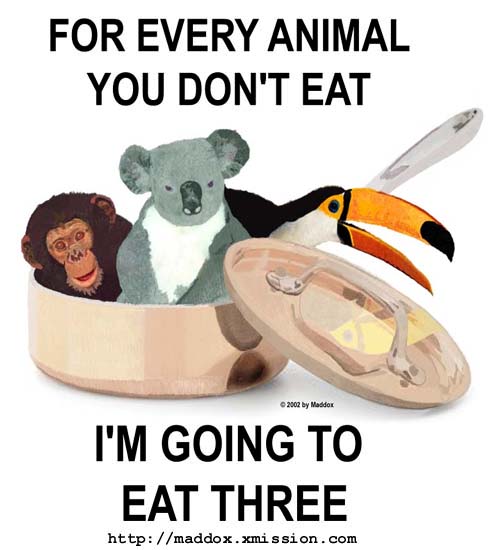 Ever get the feeling that vegetarians consider themselves morally superior to you? Like they think that not eating meat makes them so special that their shit doesn't stink? As if when someone stops eating meat, they suddenly become holy and dignified and it excuses them for the years of inconvenience and frustration they inevitably inflict upon their friends, family and co-workers who just want to go to a restaurant and order a damn steak without constantly being reminded that they're going to hell for eating an animal that spends most of its life shitting in a field. There are those of us who don't have a hyperactive sense of guilt and we don't give a shit about your mixed up self-righteous moral vegetarian agenda.

"I can't eat meat." The four worst words to hear when you're going to a restuarant with someone. I literally cringe every time I hear those words because I know it means that we have to drive around the city for 2 hours looking for some restuarant that serves "friendly" burgers, which ironically look and taste exactly like hamburgers--which vegetarians object to eating because it's either A) gross or B) murder. If it's so gross, then why go out of your way to eat something exactly like it, asshole? It's funny how vegetarians suddenly stop bitching about murder as soon as you point out their fancy leather belt or shoes, or that they drive a car and use electricity which contributes to polluting the earth and contaminating everything including the precious animals that they refuse to eat.

Well I'm tired of it. So what I've decided to do is sponsor a vegetarian! It's easy and spiteful, and we all know how much fun spiting people is! I'll explain..

What does it mean to sponsor a vegetarian? It means that you have to find someone in your life who's a really big pain in everyone's ass every time you want to go out to eat, and then you commit yourself to eating THREE times the amount of meat you'd normally consume to make up for all the meat that your vegetarian buddy isn't eating. It's that simple! That way, you can reverse the guilt trip that they've been laying on us for years by not only neutralizing their cause, but making it actually worse by eating more animals than would have ever been eaten had they not chosen to become vegetarians!

What if vegetarians say they don't care because we'll become fat by sponsoring them? I've thought about that already. All you have to do is exercise. I know it goes against the being lazy rule that I advocate so much, but this is so spiteful that it more than makes up for the exercise you'll have to do--which means that if you choose the 3 to 1 plan and sponsor a vegetarian, you're being so spiteful that you can't lose! If you have a choice, eat three separate types of animal to maximize your efficiency! Only offered beef? No problem: visit the zoo and eat a monkey!

The best part of it is that this plan is bullet proof. Finally those of us who don't have our heads firmly planted up our asses (with respect to vegetarianism, don't get me wrong, most people still need a crowbar up side the head) have a tool to combat these moral elitists!

*Note: many people have asked me permission to make shirts using the image at the top of this page. As a convenience to you, I've made some of my own to help you out with this campaign, check them out here: http://www.maddoxrules.com

1,391,969 vegetarians have been sponsored by people who don't give a shit about them or their stupid crusade.