Spider-Woman's Big Ass is a Big Deal
It used to be possible to go for a week or two on the Internet without being lectured by the Social Police. Now you'd be lucky to go a day without people tripping over themselves to be offended at something—anything.

You know the type. We all do. You'd rather have your teeth filed down to nubs than be cornered by one at a party. These preachy, bloviating, pharisaic shit-heads bristle at the thought of lecturing you on morality, usually with the help of a Tumblr post to enumerate all the things you're doing wrong and why you should feel like an asshole every waking second of your life. You don't need to ask them for their opinion because they'll give it to you whether you want it or not. The periodicity of how often these whiners find something to be outraged at is regular enough for scientists to start replacing atomic clocks. The cause of all the social outrage this time? A variant—read: optional—comic book cover: Hey here's an idea: don't like something?
DON'T BUY IT.
If you don't like something, vote with your dollars by not buying it. Companies will hear your message loud and clear and stop making content that offends you. End of controversy, right? Of course not. I don't believe for a minute that the most vocal critics of this cover were ever intending on buying this comic (or any other) in the first place. And it's likely that this was a calculated move by Marvel to drum up controversy and sales. But like all great non-issues, this controversy is blown way out of proportion by idiots who aren't familiar with the many borderline-erotic poses Spider-Man has had over the years. Here are the two covers superimposed (Spider-Woman scaled and rotated):

What critics of this cover 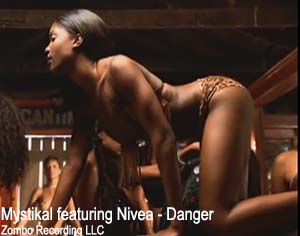 aren't willing to acknowledge is that art evolves and reflects the culture we live in, every bit as much as music, fashion and even food. You can see trends in fashion depicted on the pages of comic books because many artists draw inspiration from real life. Steve Ditko made the print (above, right) during the Silver Age of comic books in the 50s/60s, when giant bubble butts weren't in vogue, whereas Campbell's cover came out when Mystikal's "Danger" was on the top Bill Board chart. And it's plausible that the artist, Milo Manara, is influenced by pop culture just as much–if not more–than he influences it himself. The variant cover can even be seen as a commentary on current pop culture trends, or at least a reflection of it. It's telling that people are outraged by the supposed sexualization of a fictional character which, as many have pointed out, closely mirrors Nicki Minaj in her Anaconda video: 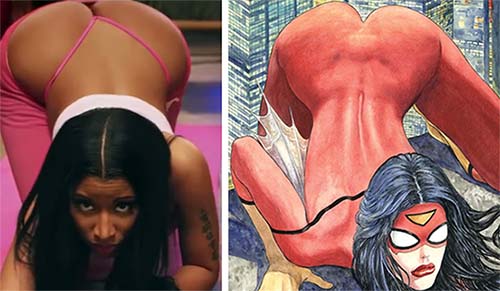 Nothing wrong with either of these.
The criticism that Milo Manara only sexualizes women is moot. His treatment of Night Crawler in this variant Marvel cover, for example, is also evocative, yet didn't provoke any righteous indignation from the social police: 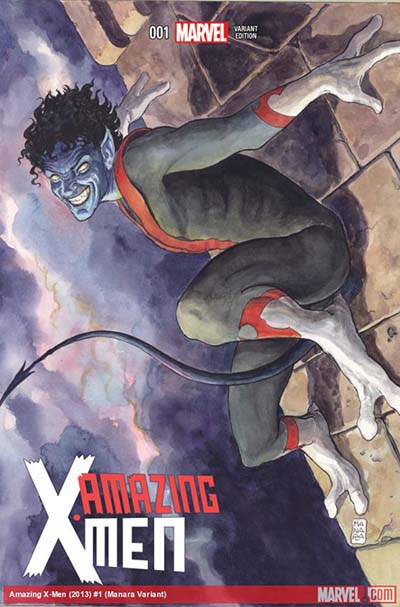 No outrage here! No clever Hawkeye Initative transposition.
As mentioned in my video, the "Hawkeye Initiative" is a website dedicated to swapping depictions of women with men in the same poses to supposedly prove... something. I'm not sure what because the website's "origins" page is painfully coy, and only alludes to a problem that needs to be "fixed." Apparently in an ideal world, all men and women have the exact same poses, strengths and weaknesses. Sex and sexuality are bad and weak, so we need to draw men in stereotypically feminine poses to call attention to this urgent problem. But only after applying a liberal dose of the cherry-picking fallacy. What if the Hawkeye Initative was reversed, and Spider-Woman was drawn like Spider-Man in many of the suggestive poses he's been in over the years? I hereby propose the Spider-Man Initiative. Draw women in the same suggestive poses as Spider-Man or other male superheroes: 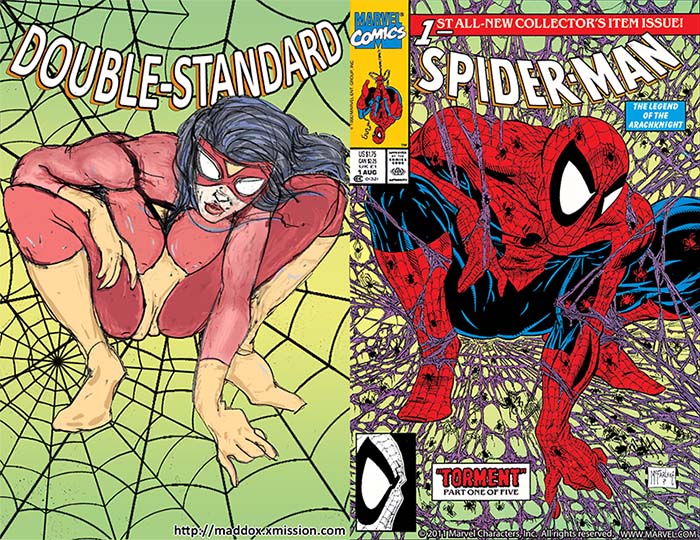 Introducing: The Spider-Man Initiative
Imagine the righteous indignation we'd be hearing for centuries to come if Spider-Woman were drawn in these spread-eagle poses. Because a woman who's spread eagle is necessarily sexual, whereas a man is not, so these depictions are completely okay for men, but wildly inappropriate for women: 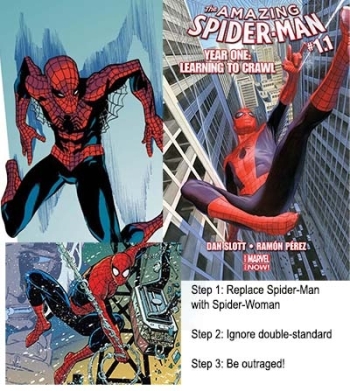 Spider-Man: all crotch, all the time.
Or these poses: 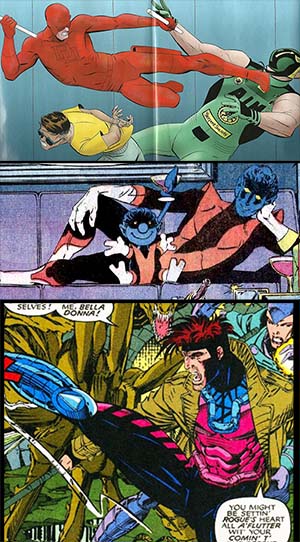 Outrage! How dare a fictional character be fictionally sexualized?
And here's the most evocative comic book cover of all time. Not a single person came to my defense for being sexually objectified. As if having giant balls overtly drawn on the cover isn't bad enough, the mast on the ship looks like a giant penis. Where's the outrage? Why isn't TIME Magazine writing about this:

My body isn't yours to sexualize. So in conclusion, everyone's an idiot except for me: 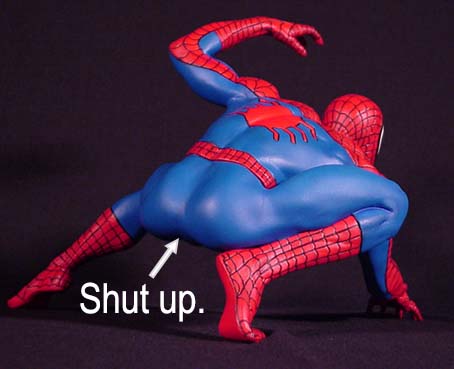 Source
47% of comic book readers are female, yet apparently we still need to make comic books more inviting to female readers. But don't let the facts stop you dipshits from raging. Nobody's forcing you to buy, watch, read or play anything. If you have such a huge problem with comic books, write your own comic book and see if you can make a profit with whatever boring bullshit you want to whine about. Tweet
785,561 people don't have enough real problems to deal with.
Available now!
Join the mailing list here
Back to how much I rule... • New Book • Store • Email • Patreon •