Kids need to be nurtured and encouraged.
When I started my website, the web was a young place. I was a brash 16-year-old kid who didn't care about anything but himself, and that's the attitude I had in my writing. I was so arrogant and foolish to believe that I was the most important person in the world. People would come to my website, and it was obvious to them that it was a cry for help. And when they offered to help me, I responded by lashing out to keep people from getting too close to me. I was afraid to reveal myself. Well, I have some news to share:
I'm a father. 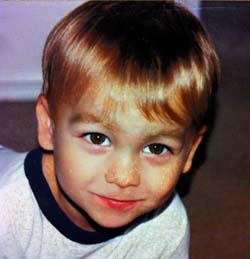 My second Chance at life.
The reason I didn't mention it earlier is because I was afraid I'd be judged, and because I was fighting a long custody battle with my ex-wife. Turns out all these hateful things I've been saying all these years really came back to haunt me when I wanted custody of my child. That's why I took such a long hiatus in 2009 to do some quiet self-reflecting. I think I finally realized how wrong I've been when I broke down in court as my ex-wife brought witnesses to testify against me. I broke down as I listened to this guy tell his story about how I made him depressed and insecure because I said he was using ADD/ADHD as an excuse to underachieve. I constantly mocked other people for doing things I thought were "stupid." The worst of it was when I would mock kids for their limited abilities. I was a monster and an ageist. Instead of treating kids special for being young, I treated them like my peers, which was wrong. Obviously kids can't draw as well as adults, so we should treat them differently and give them praise to encourage them to keep drawing, even when they're not very good at it. People always say that having kids changes you, and I never thought I'd say this, but they were right. There's an indescribable change that occurs to you when you have a kid. Your focus, life and priorities change drastically, and definitely have. That brings me to the reason I'm writing this:
I want your forgiveness.
I'm reaching out to everyone I've ever offended to ask you to forgive me. I've grown and matured in so many ways, and I've offended so many people over the years, that I just want to say that I'm sorry from the bottom of my heart. Kids are special little people who need to be nurtured in order to grow. 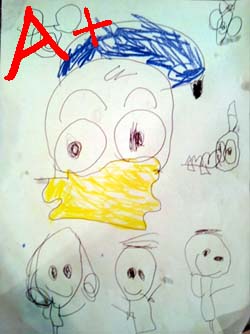 A great effort by my son. I hope he becomes an artist some day.
I can't believe I ever said anything mean about them. I just hope that you, my reader, will find it in your heart to look the other way and to give me another chance. So where does that leave my website? Well, I have an entire body of work that I'm not proud of, and it shows another chapter of my life that I'd like to forget, so I'm taking my website down within a few weeks. In its place, I hope to write inspirational passages here on how to improve your life and how to be a better father. Also, I don't want to be known as "Maddox" anymore. That name has caused many people pain and suffering. I hereby want to be known as Chance. That's the name of my son, and I feel like he has been such a bright light and blessing, that he has truly given me a second chance at life. I don't hold any hard feelings towards my ex-wife, but the custody battle was something I would never wish upon anyone. Thanks for reading my website for all these years. It was fun while it lasted. And on a final note, I've given a lot of grief to vegetarians over the years for being pious and morally superior, but you know what? They actually are. I tried eating some tofu for the first time in my life the other day, and I actually loved it. It's low calorie and high in protein. It's the perfect food. It's hard for me to give up meat because I've eaten it all my life, but little-by-little I'm changing my ways. I want to impact this Earth as little as possible, and I want to set a good example for Chance. Thank you all for believing in me, and thanks for giving me a second chance (pun intended). I wish I had a joke to close with here, but having a life with purpose is no joking matter.