The most overrated sandwiches in America.
I've traveled around the country 3 times on book tour, and have thus been to most major cities and states. And every time I go to a new city that's famous for some special food or sandwich, I go out of my way to try it from the best location so that I'll have something to compare all other sandwiches to. Here are the results: 1. Philly Steak & Cheese 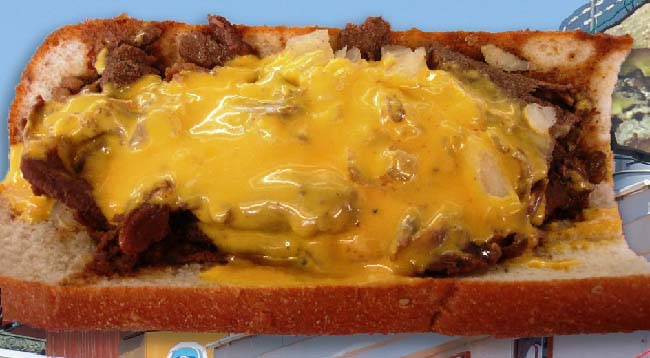 Every Philly cheesesteak sandwich I've ever had has been an exploration of sadness. No other sandwich on this list gets as much scrutiny and faux expertise bloviating about the "real" sandwich as much as the Philly cheesesteak. It's not even a sandwich anymore, it's just an excuse to be smug (like New Yorkers and their magic pizza). Every time I tell someone I don't get what all the hype is about, they claim it's because I had a bad sandwich. This mythical food supposedly exists only in Philly. Then if you're actually in Philly and you commit the sin of not liking this dubious food icon, then apologists claim "you went to the wrong place." And if you happened to go to the right place, and you still think the sandwich is a mouthful of suck, then you "ordered it wrong." 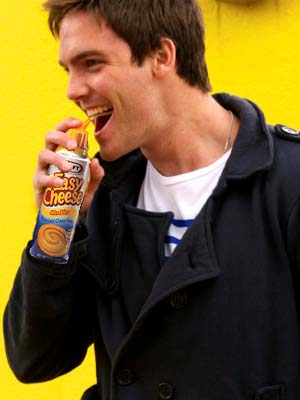 I know how to order a sandwich you fucking idiots. It's a sandwich. There's not much to it. And therein lies the problem: one of the ingredients is cheese whiz. That's right, all of the long-winded sermons about the "real Philly cheesesteak" is about a food that contains a yellow, processed, mucoussy cheese-flavored paste. Here are the ingredients in this "delicacy:"

When one of the ingredients in a food is processed cheese sauce, you don't have the right to be a snob about anything. Yes, I know you don't have to get it with cheese whiz. I've tried it with other cheese, and it still tastes like someone took an upper decker in my mouth. Too bad hype doesn't have flavor, because this sandwich would taste incredible if it did. 2. Po' Boys 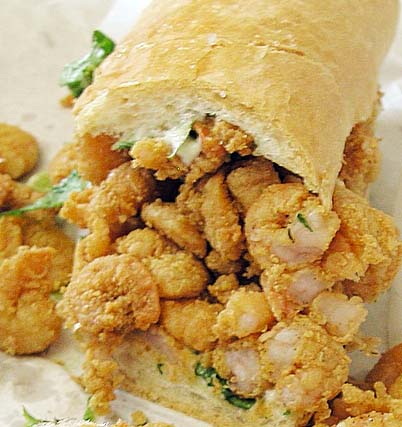 Here are the steps to making a po-boy sandwich: I don't blame the makers of po' boy sandwiches for them being so shitty. I blame myself for eating them. I've had countless po' boys, all with different toppings and meats; I don't know why I keep eating them because every single one tastes exactly the same: fried. Nothing brings out the flavor of great seafood like deep frying it. If you've ever had popcorn shrimp, then you've had a po-boy. The po-boy was invented when someone was eating popcorn shrimp and said, "you know what would make this breaded shrimp better? More bread." So they put the shrimp on a sandwich and added the shittiest lettuce in existence to it: iceberg. Barf. This doesn't count as a food. It's an appetizer with an identity crisis. I mean, why stop at popcorn shrimp? Why not put nachos or jalapeno poppers on a sandwich, dickheads? Oh, I know! Because it's a shitty idea for a sandwich, a non-food and totally overrated. Next. 3. Chick-Fil-A Chicken Sandwich 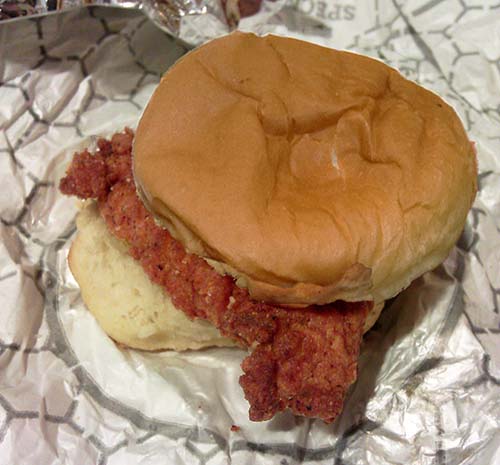 Chick-Fil-A's claim to fame is that they "invented" the chicken sandwich. Yes, these chumps have the audacity to claim that they were the first people in history to take chicken, first domesticated in 6000 BC, and bread, a staple of the Neolithic era, and put them together. Again, because this warrants repeating, they're claiming that before 1967, nobody in history thought to eat chicken with bread. Making a claim that obnoxious is begging people to be critical about their sandwich. So what makes their "invention" so special? Well, nothing. It's just chicken and bread (pickles optional). That's it. And like Po-Boys, the chicken is breaded, so you're eating bread on bread. The bun is the same deflated fast-food bun you can expect from other shitty franchises like McDonald's, with a sinkhole-like depression in the middle. The pickles are sparsely placed on the bun; you get exactly two, meted by a tight-fisted employee. I wouldn't be surprised if they weighed each slice. Often the two pickles are grabbed together and placed on the bun so they're overlapping, further reducing the surface area of the sandwich that includes a bite of their stingy pickles. And the chicken itself? BORING. The breast is the most overrated part of a chicken. Thighs are way jucier than chicken breasts, yet all you idiots keep ordering breasts to be "healthy." Well guess what? The difference in calories of a cup of breast versus thigh is 62 calories. I lose that many calories in the heat my brain emits while I shit in the Chick-Fil-A sack I'm about to return. One of the ingredients is "calcium propionate," and according to their website, it's used:
"...to retard spoilage"
Mission accomplished guys, because your whole sandwich is retarded. 4. McDonald's McRib 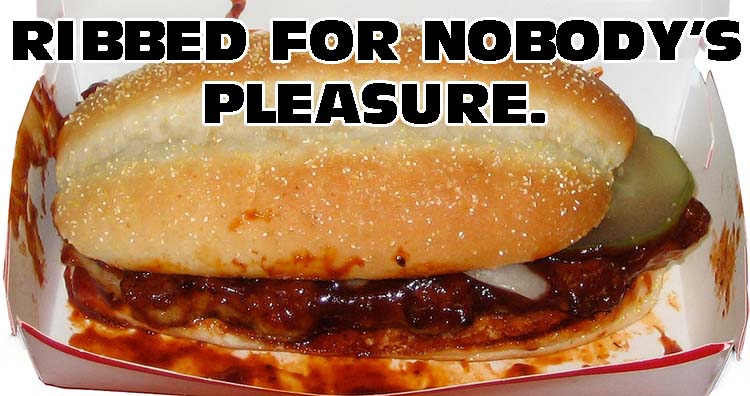 For those of you outside the US who are unfamiliar with the McRib phenomenon, it's basically a sandwich made with the highest quality ingredients and the best cuts of meat from a pig. In fact, here are the cuts used to make this sandwich: 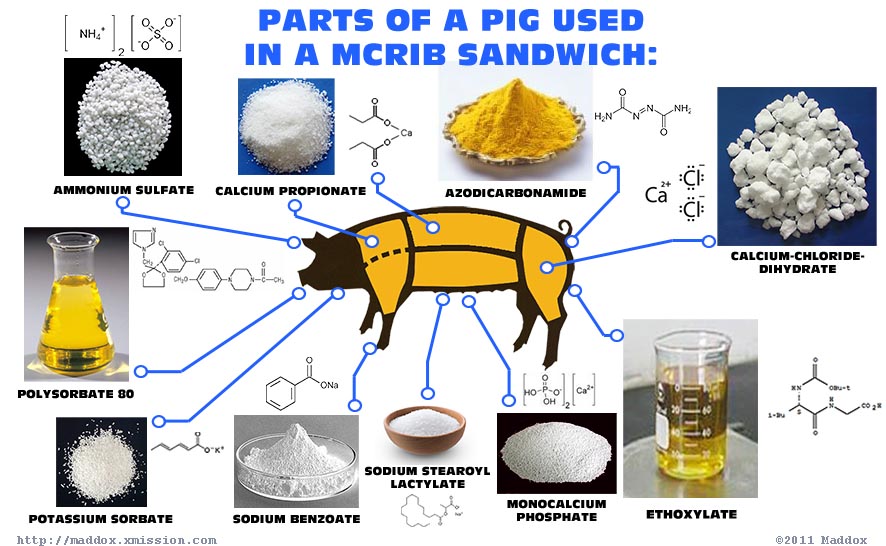 Don't recognize the ethoxylated diglyceride cut of pork? That's because that shit doesn't come from pork. These are just some of the chemicals used to make this shitwich. In fact, some of these chemicals are more commonly used in industrial paints and textiles. Here are some of their common uses:

If you like emulsified dick meat, then you'll love the McRib. This is the only sandwich that almost didn't make it onto the list because of a technicality, that technicality being that it's not food. The patty is made by grinding lips, assholes, and tripe into a toothpaste-like consistency. Then it's caked with chemicals and pumped into an injection mold to give it a spongey gray texture, then dunked in a runny McRib sauce, made mostly out of water & corn syrup.

Like Chick-Fil-A's sandwich above, you're meted precisely two pickles with this sandwich. And even these pickle slices have 11 ingredients not counting the individual "natural flavors," and are artificially colored. The pickles sit atop the patty like they're defeated warriors, slumped over in slimy, limp, lifeless slabs of something that once resembled a cucumber. And you only get two. 5. Any sandwich with fries in it 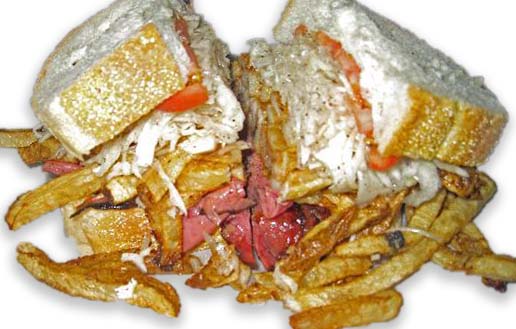 A number of restaurants I've been to offer sandwiches with fries on top. Why? I can do that myself if I want to--and I don't. It's a side-order item for a reason. Mostly because fries suck. The difference between a really great fry and a mediocre one is very little. They taste like oil. Snore. There's a place in Pittsburgh called Primanti Brothers that puts fries on their sandwiches. Every single one of their sandwiches can come with fries on top. Want ham & cheese with fries on top? Cajun chicken? Fish & cheese? They can do it. At Primanti Brothers, they'll go the extra mile to put a scoop of fries right on top of your sandwich instead of on the side. They even acknowledge that nobody really gives a shit about their gimmick with their "almost famous" slogan. I like that. 6. White Castle Burgers 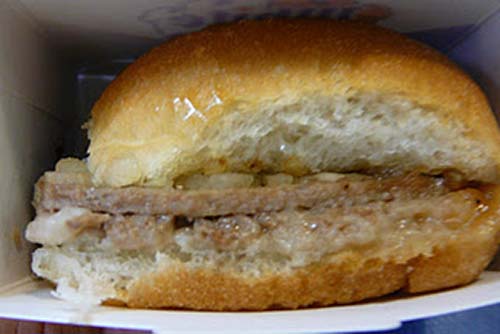 I first heard of White Castle burgers years ago when my friends on the East Coast were raving about them. Then years later, "Harold & Kumar go to White Castle" came out and I was further intrigued. Then I finally went to Ohio, home of White Castle, and tried it for myself. The verdict? Extraordinarily shitty! These would be great if I were a stoner dipshit. But I'm not, so they're not. White Castle really deserves some recognition here, because to make a sandwich this bad takes effort. Even the cheapest store-bought bread and lowest quality ground meat won't produce a burger this greasy, and this freshly stale. The best way I can describe the flavor is to go sit in a busy diner that smells like onions and grease for 4-8 hours. Then come home, change your clothes and smell the clothes you were just wearing. That smell is how these burgers taste: stale. Each burger comes wrapped in its own paper sleeve, and yet, the paper sack I was carrying my food in was transparent from grease seepage. On top of the shitty flavor, these burgers are tiny, almost too small to qualify as a slider. This image of the patty being compared to the thickness of a quarter has been floating around the Internet for a while now: 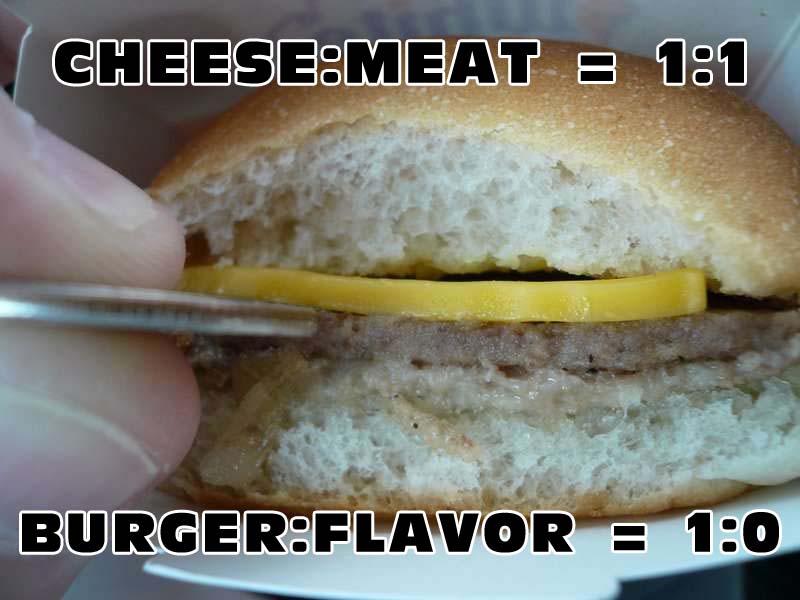 The meat is pounded as thin as deli cheese. And if you look closely, there's a layer of doughy film right underneath the patty where the grease has moistened the bun, giving it the consistency of pig snot. These sandwiches are the perfect thing to eat if you hate yourself. 7. Subway Sandwiches 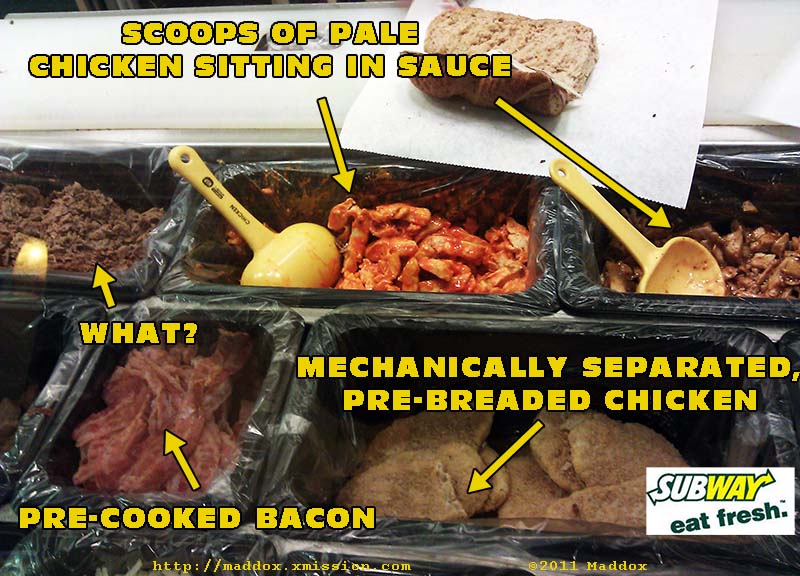 It's hard to fault a Subway sandwich for being bad, because you're generally responsible for picking the toppings (when the lettuce-happy employees aren't two-fisting your sandwich's bread hole with all that iceberg). For a company whose slogan is "Eat Fresh," it's pretty ballsy that not a single thing on the menu is actually fresh. Either that, or Subway's trying to change the definition of the phrase "eat fresh" to "fuck you." In a place that prides itself on being fresh, you shouldn't find scoops of dry, breaded, pre-processed meats sitting in plastic bags, unless they're in the dumpster (which is where they belong). Even the vegetables aren't "fresh" because they're pre-cut and sitting in tubs for an hour or more. The avocado that you have to pay a premium for is usually a browned paste by the time it sullies your sandwich, and the chicken patties are microwaved when ordered. Because when I think "fresh," I think microwave. And to top off this fresh meal, every Subway employee is trained to ask you if you want to add a bag of chips and a sugary fountain soda to your order. And it works. Keep eating fresh you morons.

642,866 people printed out this article and consumed it on a sandwich.