A message to cops.
The point of this article isn't to judge whether cops are justified in doing what they do. This article has nothing to do with police training. And this isn't just about American cops. This is about the perception that we, the public, have of you when you perform the following actions. It doesn't matter if you disagree with these perceptions, because right or wrong, they exist. The point of this article is to simply let you know that we're watching, and this is how we see things.

1. When ten of you show up to make one arrest, it makes you look like cowards. 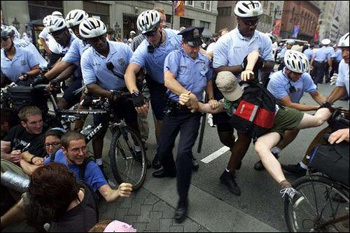 On my way home from a bike ride a few weeks ago, I saw three arrests being made in under an hour in a relatively safe part of the city. At one of the incidents, eight police cruisers responded to make one arrest. The guy who was arrested was ejected for being too drunk in a bar. Just one guy, and he was drunk. He had a stupid moustache, hadn't hurt anyone and was drunkenly walking home when he was tased and tackled by 3 cops before 6 police cruisers showed up in addition to the two that were there, for a total of 8 cruisers and 10 cops. The man was unarmed. How much backup do you need? It's one guy. If you can't handle one drunk guy by yourself, you shouldn't be a cop. Training tells you otherwise? Well stop being trained by pussies. 2. When you tase somebody who isn't trying to escape, it makes you look like lazy cowards. A taser isn't a remote-control for people. Want to talk to someone? Then walk over to them and talk. Don't tase them and expect them to cooperate. Also, when someone is being tased and is writhing in cardiac arrest on the ground, they aren't "resisting arrest" by not getting on their knees and neatly kowtowing to your demands. They're incapacitated. You look like idiots barking orders at them when they can't move. Being a cop has certain risks associated with it. If you aren't comfortable with those risks, don't take the job. Always trying to minimize your risk of injury at the expense of others by being a tase-happy dipshit makes you look like lazy pussies.

Tasing everyone you see because they might pose a risk to you is like spraying everything with a fire extinguisher so it doesn't catch fire. Part of the problem might be that many cops are overweight and out of shape. If you fatasses can't chase someone down, then you shouldn't be cops. Studies have shown that not being a lardass is just as effective as using a taser. 3. When you set up speed traps, it makes you look like you don't have anything better to do. I get happy every time I see a speed trap, because I assume it means all criminals have been locked up, you've caught the guys who broke into my car on three separate occasions and my stolen property will be returned shortly, right shitheads? Good job guys, take a break and make some scratch for the city. Because why the hell else would you be sitting on your ass in a ditch if that wasn't the case? People who speed are awesome. The last thing this world needs is more slow drivers. Traffic jams occur because of idiots braking prematurely. And when you pull people over, how about doing it in a place that doesn't obstruct traffic? You know what's just as "unsafe" as speeding? Having to swerve into another lane because your stupid car is blocking traffic. Every time I pass another cruiser parked in two lanes, backing up traffic for miles, it makes me punch myself in the jaw until I pass out. 4. When you give out chicken-shit tickets for rolling through stop-signs at 3 AM, or closing down lemonade stands, it makes us think you're morons. We know that "the law is the law." We also know that you're not instruction-executing robotic morons. When you harass us with bullshit fees and fines, it makes us question your judgement. We know that this kind of shit is all about money: The legal age for entering into contract in the United States is 18. So that effort to charge them fees by making them apply for a permit? Illegal. Law is the law, right? Arrest yourselves. And speaking of nepotism... 5. We know you guys use the buddy system to get out of speeding tickets. And it pisses us off. Cops have a code that basically amounts to always letting fellow cops go. When a cop pulls over an off-duty officer, the officer who was pulled over discreetly flashes his badge to let him know that he's on the force, and he's simply let go. You think we don't know what's going on, assholes? It's a courtesy not extended to anyone else, lest the officer is having a particularly good day and isn't PMSing all over the highway. Sometimes you write tickets for going 1 over the speed limit, sometimes it's 10. Then when you get called on doing something stupid like writing a ticket to someone for a law that shouldn't be enforced and rarely is (like jay-walking in New York), you hide behind your tired mantra that it's the law and that you have to be consistent. Except when you aren't. 6. When you flash your lights just to get through intersections, you look like assholes. I've followed cops who've done this, only to see them park their cruisers for coffee or lunch. And speaking of lunch... 7. When you park in a red zone to eat, it makes you look like lazy assholes. The argument can be made that police officers need to be near their cruisers at all times in case of an emergency. Fine, but that doesn't entitle you to eat at the most popular restaurants. If you want to eat at some trendy restaurant, park at a meter and pay, like everyone else. Can't find a meter? Tough shit, go someplace else. Doctors, surgeons, rescue workers and security all have important jobs where people's lives are at stake, and you don't see their cars popped up on the curb, obstructing traffic and parked illegally so they can fill their fat faces with lunch. We know you'll never get written a ticket (see #5), it pisses us off, and it makes us trust you less, and cooperate less.

Now this is the part of the article where I say "I know that police officers have a tough job," but they don't. Being a cop isn't hard, it's dangerous. There's a difference. Being an engineer, teacher or airline pilot is hard. Being a logger, deep sea crab fisher, coal miner or firefighter is hard and dangerous. Being a cop is dangerous, but usually not hard. Driving around, issuing chicken-shit tickets and filling out paperwork isn't hard, it's annoying. This is also the part where I say "now I know that most cops are good," but I don't. I only know two cops in real life, and they're both badass, but so is anyone I choose to call my friend. Most cops I see abuse their power every day by parking illegally, talking on their cellphones while driving, drifting in and out of lanes without turn signals, flashing their lights to get out of intersections and power tripping like crazy. If you're a cop who's reading this, rather than being butt-hurt by people's perceptions of you, do something to change it. Write a fellow officer a ticket. Stick your neck out for us, rather than your colleague for a change. Do the right thing. We notice. And as for us: record cops. Record them all the time. Record them even if they're not doing anything. Cops are cracking down on this and they're trying to change the laws to make it illegal so they can't be held accountable for breaking the law. They look up your plates every time they're behind you at a stop, even if you haven't done anything, just to check up on you. It's time we started checking up on them.

Cities have made $710,601 more since this article was published just from cops paying meters and tickets like everyone else.