Maddox vs Crickets: who wins?
The answer won't shock you.
Did you know that crickets are stupid assholes? That's a fact. I actually looked it up in an encyclopedia one time and it said that verbatim, "stupid asshole."
My apartment got infested with crickets a few weeks ago, and the noise drove me to the brink of insanity. I've been trying to finish my manuscript, and all I can think about is this annoying son of a bitch chirping happily away. And what's worse is that crickets chirp so that they can get laid. So the whole reason I was suffering was just so some dipshit cricket could bust a nut. I'm losing sleep and productivity so some insect who's too good to jerk off can get laid? Not if I have anything to say about it. So I vowed to capture and eat the cricket that was tormenting me during a live Periscope broadcast. Here are the results:
Crickets are among the worst pests to have. At least cockroaches have the decency to eat your food in peace. Crickets eat your food, shit everywhere and make a loud, obnoxious chirping noise to flaunt their intractability. 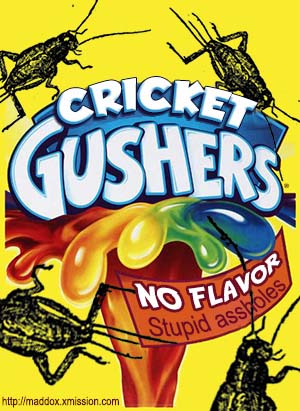 Crickets: bring a mop if you step on one. I used to kill crickets, but they're even annoying when they die because they're the juiciest insects I've ever killed. They explode everywhere in a big juicy mess that you have to mop up for days. They're like the "gushers" of insects. They're the only insect that's even more annoying when you kill it than when it's alive. In some ways, I envy the cricket. It's like evolution has perfected annoyance. It's not the only pest I've been infested with. I've dealt with hornets, lizards, bees, silverfish, boxelder bugs and bums. Crickets take the cake for being obnoxious. Though of those, silverfish come a close second. For some reason, if you smash a silverfish, the spot where you killed it will attract other silverfish. Maybe they're there to mourn their fallen siblings. Unfortunately for the silverfish, I have no problem killing insects in mourning. I hate crickets and fully endorse their consumption. It's the one time I might see eye-to-eye with environmentalist dipshits, because it's now being touted as a sustainable food source. Fine with me. I have no problem with the existence of crickets, so long as that existence is in my digestive tract, actively being turned into poop in my colon. I hate crickets. Tweet 121,407 crickets came to this page, but left because they're stupid assholes and can't read.
Available now!
Join the mailing list here
Back to how much I rule... • New Book • Store • Email • Patreon •