Every once in a while a movie comes along that makes almost every other movie that came out before it look like a stupid, dumpy piece of shit that was a total waste of time. Mad Max: Fury Road is one such movie. If I was a director in Hollywood right now, I'd be committing suicide because the contest is over. You not only lost by not making this movie, you came in dead last with every other idiot director who decided to make any movie that wasn't this. Put a noose around your neck, drown your children in a river and write your suicide note because there's no point in trying anymore. Better yet, skip the note because I'll be too busy watching this movie to read it. Goodbye, loser. The movie starts out with some Golem-looking dudes chasing some guy and you're thinking "what is this elf-lord mystic fantasy bullshit? I didn't sign up for this." I turned to the person next to me, spat in her drink, gathered my belongings and started to make my way to the exit. When suddenly this skull-jaw Darth Vader shows up as if to say, "Sit down, idiot. Shit's about to get awesome:" 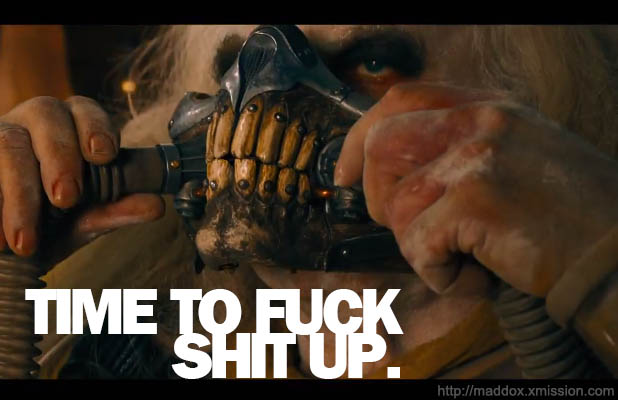 Oh shit.
This is the part of the movie where Skull Jaw's foot comes out of the screen and kicks you right in your stupid head over and over again until you apologize for not being stillborn. 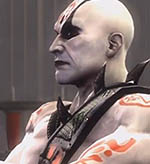 Mad Max: Starring Quan Chi Basically at this point here's what you know: everyone in this movie is either super ugly, or the main guy, Skull Jaw or a mutant Quan Chi looking dude from Mortal Kombat. Then suddenly Charlize Theron shows up. More like Charlize Heroine because she's the main female heroic lead. At first you're thinking, "great, she's too hot to be in an action movie, this is going to be sexy and disappointing." Then you see that she's actually a cyborg. Hell yeah. So all you self-doubting suckers can step aside and suck ass in the corner while the rest of us watch her run over idiots with her war-tanker. But not until she smears grease on her forehead because she wants to make herself more flammable. In the future, everyone has a war machine, nobody wears seatbelts and everyone tries to be as flammable as possible. Damn right. This is exactly how I'd make everything if I was ruler of the world: gratuitously dangerous. So basically Charlize Heroine tricks a bunch of Quan Chi suckers into going on a "detour" while on a fuel run. All her henchmen are gullible idiots, and you don't know what the hell is going on because who cares. Then Skull Jaw decides to chase her with all the badass cars he has in his arsenal. This includes the coolest vehicle in the existence of mankind: a mobile death concert with a flamethrower-wielding guitarist pumping metal at an 11. 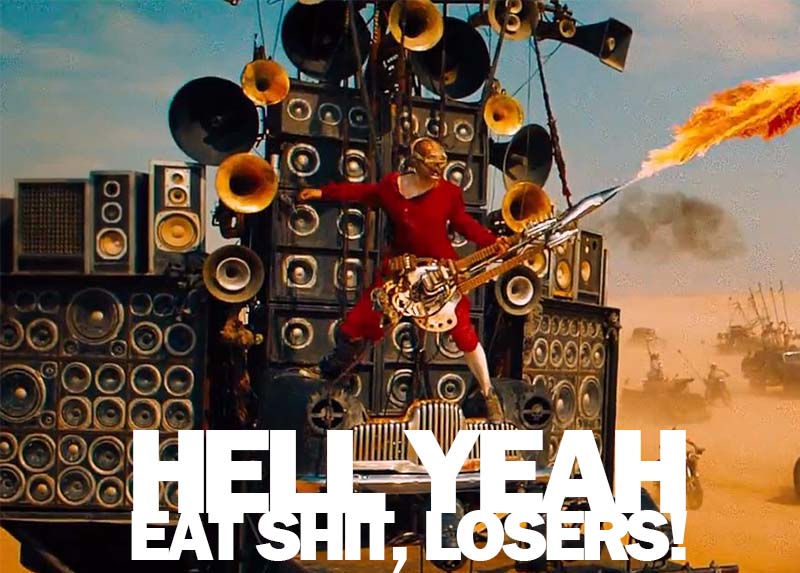 At this point I'm full-on rooting for the bad guys. Then Mad Max and Charlize Heroine trade blows that are non-sexual yet still satisfying, and they drive into a sand storm that looks super badass and all the morons chasing them get their stupid cars destroyed. This part looks so awesome that Mad Max even pauses during the action just to watch people blow up. It's as if he knows he's acting in this awesome movie and he's getting paid to do his job, but even he can't help but sit back and think about how cool his life is going to be after this movie and how he's going to spend the rest of his life getting his knob polished by conjoined supermodel twins for being in this awesome scene. After all that action suddenly Mad Max wakes up in the desert and sees a bunch of total babes having a wet t-shirt contest. One of the chicks is preggo with Skull-Jaw's child and Mad Max suggests she get off her feet by shooting her in the leg. Then they get chased again for about an hour of the most badass car chasing scenes I've seen up to this point in my life (or yours). There's even a scene where the preggo chick gets run over and her baby dies and you text your mom to tell her you wish you were run over in her womb because that was so awesome and she writes back and asks you if everything is okay. I'm rocking a solid chub at all the killing and destruction up to this point in the movie, when all of a sudden:
Grandmas.
Oh shit. Just when everything is awesome and I have the biggest, angriest boner I've ever had in my life, suddenly the thing that ruins almost every movie shows up: grannies. Except they're biker grandmas who've set up a literal boobie-trap and you think you're going to see some full-frontal. I have to be honest, I was so mad when I saw the grannies that I twisted off my genitals and threw them on the floor next to a sticky puddle of soda and popcorn. But then the grannies turned out to be snipers and more badass road warriors and you realize that the reason they're so old and dry is probably because they spent decades just scissoring in the desert, so I pick up my genitals, wiped off the popcorn and spat in the lady's drink next to me again to keep her guessing. Game on. Then the final chase scene happens which is 10x cooler than everything you just watched, which means it's 100x cooler than every other chase scene in every other movie combined. Impossibly cool. Chain saws, explosions, grandmas getting killed, kidnapping, metal, and a collapsed lung. This movie has everything I like and nothing I don't (horses). Anyway I'd go on but I don't want to spoil anything. I give this movie: