How Disney ruined The Little Mermaid
Disney's version of The Little Mermaid is actually based on a badass story where the mermaid dies at the end. There are also wolves getting their shit ruined with arrows, nipples and a bunch of idiots drowning in the original. Disney sterilized all of this to make their version as commercial and mass-appeal as possible. The original story may be ruined forever:
Disney's retelling of "The Little Mermaid" is intellectual junk-food. All of the important lessons taught in the original have been replaced with dumb hedonism and crass self-interest. The only message it teaches kids is that it's okay to be an entitled shit-head.

Hans Christian Andersen spinning in his grave. The original story was published in 1837, but the story was ruined forever in 1989. Almost every animated version of the movie that has come out since has been influenced by Disney's shitty ending. We could power turbines on par with Hoover Dam if we harnessed the energy of Hans Christian Andersen spinning in his grave. One of the first post-Disney films with a modified happy-ending was from the 1994 "Anime Sekai No Dowa" ("The World's Most Famous Fairytales") series, produced by Toei—ironically the same company that produced the 1975 Japanese version. Toei succumbed to Disney's cloyingly sweet adaptation, even going so far as to change the mermaid's name to Ariel. Garbage. This was followed shortly by HBO's 1997 version for their "Happily Ever After" anthology. The story had the same slap-dick happy ending where the prince discovers that the mermaid was the one who saved him. The contrived plot-point comes when the prince literally trips over a bundle of rope, falls in the ocean and the princess saves him. Then, as if you can hear the episode timer ticking, they wrap everything up by getting married. She even says, "I love you." Barf. Then there was an Australian version in 1998 that also had the prince and the princess marry, with yet another contrived plot point—her sisters sacrifice their hair, but instead of getting a knife that the mermaid must use to stab the prince, she gets a potion that gives her voice back. She uses her regained ability to speak to talk her way into the prince's pants, and the movie ends with another stupid happy ending (not of the handy variety, which 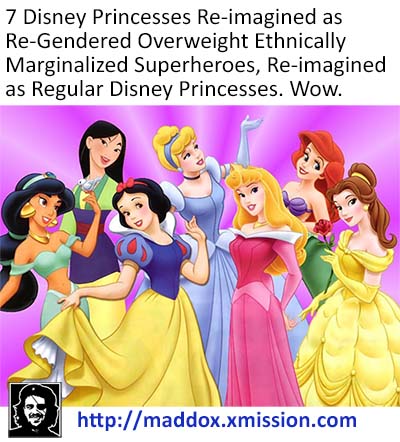 #5 blew my ass off. Wow. would be awesome). Everything and everyone in these stories is stupid forever. This isn't the first time Disney shat all over children's literature. In their 1950 version of Cinderella, they made no mention of her father who stood by idly while she was abused by her step mother and step sisters. The implications here are that he knew of the abuse and was neglectful, or afraid to act. Either way, it's yet another important lesson that kids were denied in Disney's version: sometimes parents can be cruel. Want to learn that lesson? Sorry kids, unless you got smacked around by your parents, you lived a charmed life and won't be able to relate to the plight of children with cruel parents. There are dozens of other examples but I don't want to turn this article into a general "Disney Princess" regurgitation, as I'm sick of those bullshit articles. This is about how Disney ruined literature, not a gushing infatuation with fictional royalty. Get over that bullshit. Stop re-imagining Disney princesses, and start doing something productive with your lives. Tweet 185,321 people grew up to be entitled shit-heads thanks to Disney's sterilization of literature.
Available now!
Join the mailing list here
Back to how much I rule... • New Book • Store • Email • Patreon •