Learn how to cook, morons.

Nothing infuriates quite like people who brag about their inability to cook. It's not funny, it's pathetic. And anyone who says it in my presence is full of shit because they're clearly making my blood boil. There's nothing to cooking. Like I said in my math article (Math doesn't suck, you do1), it's the act of following instructions. You have to follow instructions to log into Facebook, tie your shoe laces and drive a car, but cooking is somehow too complex to master. The three or four steps you have to take to complete a meal is beyond you. Tell you what, why don't you just eat shit then? In the video above, I said cooking comes down to 4 basic steps, but really it boils down to just two: That's it. Sometimes you don't even have to add heat if you're making a salad. And if you are, that means you have enough time to learn how to cook something because you clearly have enough time to waste it making a salad. Cooking chicken is easy. Beef? Easier than breaking a child's will. Pork? Easy like apple pie, only easier. And speaking of apple pie, here's one I baked last Thanksgiving because I'm a badass: 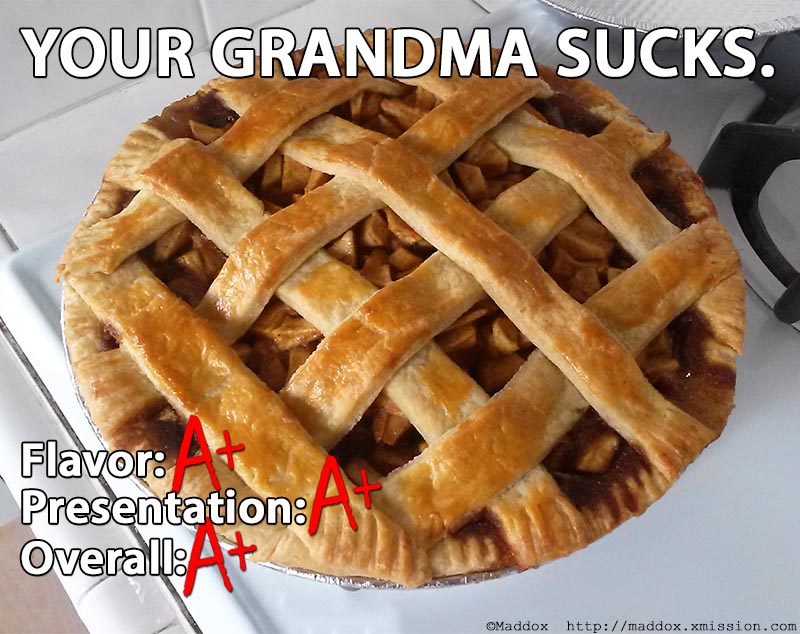 I made this pie from scratch. I didn't know how to bake a pie before I made this, so you know what I did? I decided not to be a helpless sack of shit like most people, and I used Google to find a recipe. Except the recipe I found looked like garbage. It was called, "Grandma Ople's Apple Pie"2, and as I scanned the ingredients, I noticed that it lacked something every apple pie should have: cinnamon. Ever heard of it, shit face? What kind of stupid asshole bakes an apple pie and doesn't put cinnamon in it? No thanks, grandma, I can make soggy apples by myself. Tell you what, why don't you keep your shitty inheritance while you're at it. You probably forgot a crucial ingredient there too, like money. The more I read of this recipe, the more I noticed how simple it was. For example, it called for one type of apple. BARF. What am I, an animal? You want at least 2-3 types of apples in a pie. Even a shit-chucking ape knows that. So I started using common sense to modify this recipe, and as I skimmed the comments, it turns out most people who aren't total morons were doing the same thing. Even if you follow the recipe as-is, it's only 5 ingredients (you can use brown sugar for the whole thing, and water doesn't count as an ingredient, so spare me your shitty emails). My pie tasted so good that I brought a piece of it for a friend that fell on the floor (both the pie and the friend because she was drunk) and she still ate it. My pie tasted so good, it overpowered the flavor of dirt. Making the crust was easy too. I don't get why everyone makes such a big deal out of this shit. Grandmas do it all the time, and there's nothing I can't do better than your grandma. Forget grandma Ople, listen to grandma Maddox. The best thing about cooking is that it has a built-in penalty/reward system. If you suck at it the first time (meaning you didn't follow the instructions), then your penalty is shitty food. Try harder next time. Or don't and eat shit, see if I care. Just spare us your unfunny story about how inept you are at cooking. It's not cute, it's stupid. You're stupid. Sources:
Tweet 200,466 people don't know how to cook and should starve.
Available now!
Join the mailing list here
Back to how much I rule... • New Book • Store • Email • Patreon •