Give Idaho back to Britain.

I hate Idaho drivers. I know, I know, everybody has a local horror story about bad drivers, but until you've experienced the lofty heights of ineptitude of an Idaho driver, kindly shut the hell up. I've done a fair amount of driving around the states, and people from Idaho take the cake. If you see some dipshit holding up traffic for miles, there's a good chance that the driver is from Idaho. Just look for this stupid plate: 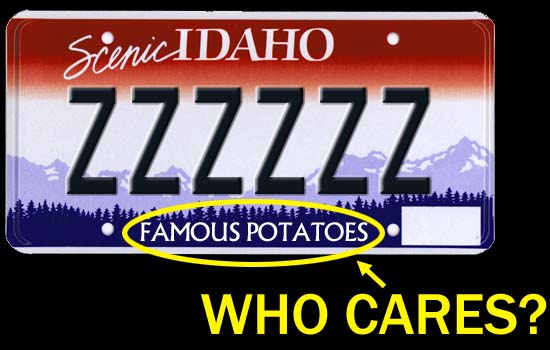 Idaho's state colors are: red, white, and boring. I'd go so far as to say that Idaho is the most boring state in the union. Though, I have to admit that I've never been to New Hampshire, where the most interesting thing that state has/had going for it is the formation of a cliff that kind of looked like the face of an old man when viewed from a certain angle. New Hampshire is so boring that they literally put this arbitrary geological formation on their state coin. The "face" finally collapsed in 2003, causing many to be so distressed that they literally cried: 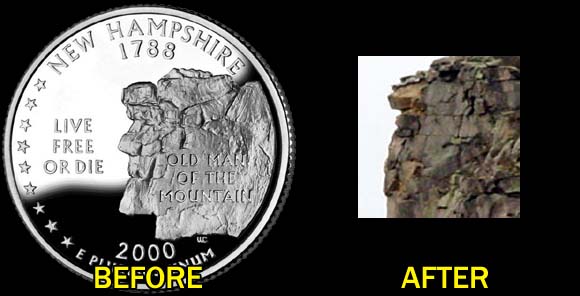 WHERE'S YOUR OLD MAN NOW? New Hampshire's Tourism Industry: 0, Me: 1. To be fair, having a rock that sort of looks like a face as your state symbol is like diving into a tub full of tits when compared to Idaho, where there's so little going on that they proudly proclaim how famous their potatoes are on their license plates. Are you kidding me? Celebrities are famous. Landmarks are famous. The starchy, underground stems of plants that are used for deep frying side dishes are not. Wow, your state vegetable is a tuber. SNORE.

Idaho is possibly the only state in the union that actively makes its residents become shitty drivers because of how uninteresting it is. There aren't any "skyscrapers" in Idaho, so when they get bored, they drive down to Utah to gawk at ours. The only problem is, there aren't any skyscrapers in Utah either. Here's a comparison chart to show the tallest building in Salt Lake City (the largest city in Utah), to some landmarks in real cities:

I've pissed higher than the tallest building in Utah. So you can imagine how bored you'd have to be to come here. If you still aren't convinced that Idaho is the dullest place on earth, here's a list of things to do in Idaho (these come directly from visitidaho.org):

Not only is Idaho a ho-hum state, Idahoans (their word, not mine) are gullible. Idaho was named in 1860 by George M. Willing, a mining lobbyist who pulled the name out of his ass (look it up). He picked the name "idaho" and told congress that it was a Shoshone Indian word that meant "Gem of the Mountains." Most westerners in the United States are completely devoid of any cultural heritage, so it has always been popular out here to latch onto American Indian monikers. When people finally caught on that "Idaho" was a made up name, it was too late. The name caught on and the morons who live there have called themselves "Idahoans" ever since.

I propose that we give Idaho back to the British, since that's who we got it from in the first place. I don't think it'll be too much of a problem because there aren't a lot of people in Idaho. According to the 2004 Census report, Idaho's population is 1,393,262. Just for comparison, there are 1,970,000 cows in Idaho. New rule: if your state has more cows than people, you don't get to be a state anymore. 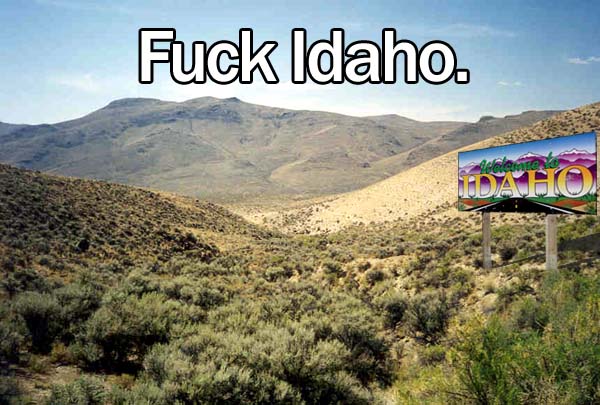 The biggest thing to happen to Idaho in years is the movie "Napoleon Dynamite," which was filmed there. This movie was such a big deal that Idaho's state legislature has proposed a resolution to commend the creators of the movie for raising awareness of Idaho. Way to put those tax dollars to use you shit dicks. Bang-up job.

3,058,244 legislators from Idaho are considering a resolution to condemn me for being mean.