Stories in video games blow. I don't play video games to read, I read to read. I already have books, and I don't want to read any of them in my games. It's relevant to say that I'm a published author who writes for a living, yet I still don't want to put books in the movies I watch, the music I listen to or the food I eat. Even when the dialogue in a game is performed by voice actors, I still don't want to hear it because:
Now I have to listen to some slow-ass voice actor stumble through lines? Think about it: when was the last time you called your friends over to show them a cut scene? Never. That's because nobody gives a shit. The practice of making giant, over-the-top cinematics in games is adding millions of dollars to the cost of already-expensive games. What's worse is that developers are occasionally aware of this and they try to ham-fist gameplay into their ham-fisted stories. One of the worst examples of this is from Call of Duty: Advanced Warfare: 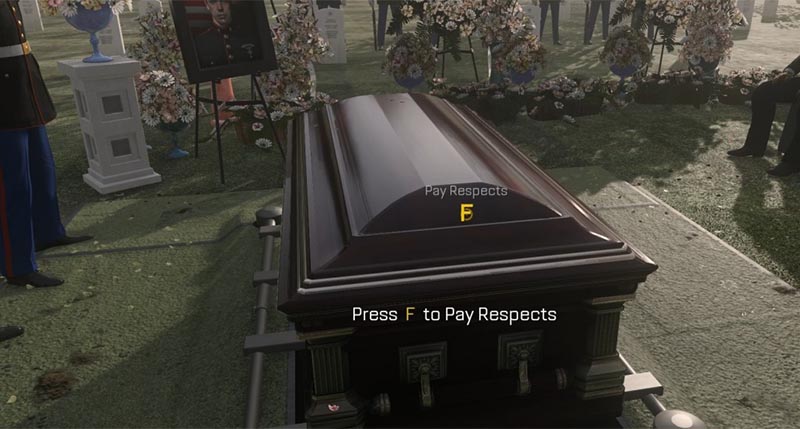 They tried to "game-ify" the story by adding a button prompt to perform an action that you can't skip. You're able to run around the coffin as much as you want, just like at a real funeral. What's supposed to be a somber moment becomes the exact opposite: a goofy footnote in gaming history, as you reach down to "press 'F'," not because you feel anything, but because you have to. This stupid button prompt forces interactivity into a cut scene that doesn't need it. Pressing 'F' makes me feel nothing. If you really want to make it interactive, why stop there? Make it an all-out funeral simulator:
That cost of developing all these bloated stories gets passed onto you in the price of the game, and puts pressure on the developers to essentially produce a good movie on top of making a good game—which is hard enough as it is. We don't need game developers to worry about telling a story. I watch movies for that. And speaking of, most movies are garbage despite the huge budgets and A-list acting, writing and directing talent. Games can't compete, and shouldn't. I don't want to see, read or hear stories in video games unless they're RPGs. Cramming a story into a game makes about as much sense as putting poetry in a coffee maker. I don't want to read any poetry and I sure as shit don't want to drink any. But I really, really don't want to read any. In my masterful video above, I criticize the game, "Reckoning: Kingdoms of Amalur." In the game, there are books on shelves that you can literally pick up and read. You can get lost for hours reading some inane story about fairies and elf-lords and whatever other made-up, mystic voo-doo bullshit they throw at you. And you know what? None of it matters because like every modern video game, it holds your hand and guides you to the next checkpoint with a big glowing beacon on a map, so the story doesn't matter. I proved it by progressing through the game without reading a single line of dialogue. I rule. What's worse is that some of these games try to give their ancillary characters, and people you meet in throw-away side missions, stories. I barely give enough of a shit about the protagonist, who gets repeatedly killed when I play (and by 'I,' I mean "you" because I've never died in a video game ever). What makes you think I give a shit about some guy I meet on a side-mission who wants me to collect a bounty? Film critic Roger Ebert thinks that a good movie is one in which you care about your characters. But it's hard to care about a character you repeatedly get killed by explosions, strangulation and bottomless pits. Asking people to care about a character they control and get killed repeatedly is asinine. Think about it: if you truly cared about your character in a video game, the psychological impact of repeatedly seeing him or her dying over and over again would be devastating. You're in serious need of therapy if you cry after getting your protagonist killed in a video game. What you need is counseling, not a good yarn. Spare me your obfuscated story and focus on making a good game. That's all that matters. It's time to cut the cut scenes and put the "game" back into gaming. Tweet 213,514 hours have been wasted watching, reading or listening to shitty stories in video games.
Available now!
Join the mailing list here
Back to how much I rule... • New Book • Store • Email • Patreon •