No, I don't want to install your app.

We are in the midst of a global cataclysmic deluge of shitty apps I've dubbed The Great Appocalypse. I'm tired of going to "mobile" versions of websites that constantly nag you to install more apps. Here's an example: 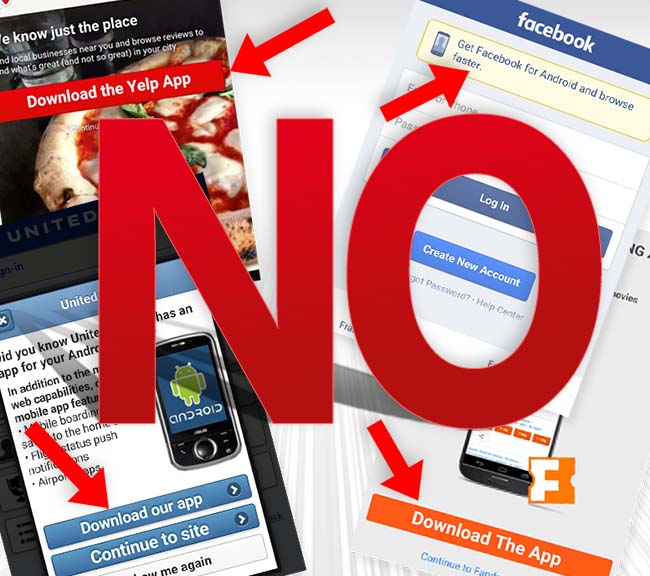 The high cost of free apps: Most of the companies asking you to install apps are doing so in addition to offering a mobile-web alternative. Think of the company's business model, and you'll realize why it's a shitty idea for most consumers: if companies didn't have a financial incentive to develop these apps, they wouldn't do it. Apps cost upwards of tens of millions of dollars to make and maintain. They're not doing you any favors by developing these apps. Corporations aren't charities. Free apps will get money out of you, one way or another. For example, something as innocuous as your flashlight app can read your calendar, access your contacts and even track your location. They can then share that information with advertisers without informing you. In fact, the FTC cracked down on one such company in 2013 for sharing user data, even though users explicitly chose the option not to share their information.1 And according to Wired, some flashlight apps can share your personal data with a host of ad networks, including Google's AdMob, iAd and JumpTap.2 Most apps don't offer any functionality that the mobile website doesn't already offer. Anyone who thinks they do is a non-technical idiot and doesn't understand how the Internet works. For example, if you want to use your device to send a message on Facebook, that message has to use the same Internet protocols to communicate with the exact same servers that your web browser uses. The client (your phone) and the server (Facebook) doesn't care what app sends that data, it's still just data using the same Internet connection. It can't be any faster because it's not doing anything different. Companies want you to install apps because they can request greater permissions than your web browser, which gives them more access to your data that they can sell. Here's why installing superfluous apps is a shitty idea for consumers:

Apps take memory, disk space and CPU cycles away from other apps and the operating system. Every time you switch apps, the operating system has to spend CPU cycles and memory cleaning up the app you just switched from. Every time you boot your phone, the operating system has to index all of the available apps. The more apps you have, the longer it takes to index and the longer it takes for your phone to become responsive. The average user has 41 apps installed.3 Apps aren't stored alphabetically in Android or iOS, so you have to scroll through pages of tiny icons looking for the app you need. It's reverting our language back into hieroglyphs. Apps have to be compatible with a large number of devices and operating system versions, so the smaller the company, the less resources they have to make sure that the app you install for your device is bug-free.


One of the 1-star reviews for the Fandango app says, "it is constantly loading and freezing," which highlights the problem developers face: they have finite resources to develop apps, but an endless supply of devices to develop and test for. Tens of millions of users rely on web apps every day, so bugs will usually get fixed much more quickly than in less-common apps. There is a need for some dedicated apps that do specific tasks, such as QR-code readers, audio recorders, and games, but there's no advantage for consumers to install shitty apps that duplicate web functionality like the apps offered on the majority of mobile websites. Unless you want companies to mine your information to serve you more targeted ads, which I can't entirely discount as a possibility since it's likely that some people who read this article will be idiots. I still have not (and likely never will) install the Facebook or Twitter apps on my phone. I don't need or want "push notifications," which only serve to get users to check Facebook and Twitter more often so they can serve you more ads. The mobile version of the website works just fine—including messenger. Uninstall the Facebook app and start using the mobile site instead: m.facebook.com. Or better yet, delete your account and read my website instead. It's the best site on the Internet. Update (09-02-2015): 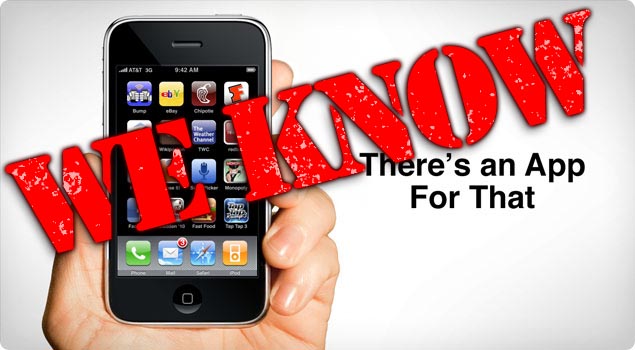 Google just announced that they're going to start downranking sites with huge app install ads. According to Engadget, "starting November 1st, any site that uses large app install interstitials will no longer be deemed 'mobile-friendly' by Google."4 Good. We know "there's an app for that." We don't want it. It's time companies stopped pushing their shitty ad-laden bullshit onto our phones, and went back to the old model of shitty, ad-laden bullshit on websites. And while you're at it, Google, how about downranking sites that have giant Javascript popups? Anyway, the point of this update is that I'm great and I caused this to happen. I win. Sources:
Tweet 207,452 people would install an app if I developed it.
Available now!
Join the mailing list here
Back to how much I rule... • New Book • Store • Email • Patreon •